Planning was over, we were now on the island. We picked up our Yukon 4x4 and headed out to check a west side location.
On and off rain is common at this time of year. It was an unusually cold winter and things are beginning to green up. We see alot of sitka deer but no bear sign. We head to the other side and find a campsite. Scott drops off on a trailhead while I go to throw up our home for the week, an eight man kifaru tipi.

Scott's story.........
Loren and I decide that I'll work down the trail and after camp is set up he'll work his way down then we'll work out a game plan. I still hunt my way through the ferns, moss, and cedars peeking out on the tidal flat every 50 yards or so. About 30 minutes into the hunt a shadow on the edge of the trees moves.........bear!! I ease my way out and range him at 122 yards then start arguing with myself about shooting the first bear I see 30 minutes into my dream hunt. He was in no hurry out feeding on grass and seaweed. I pulled my camera out and snapped a few pictures while he fed. After about 10 minutes of debating my itchy trigger finger got the best of me and I decided he was a shooter. I closed in a bit more for the shot and dropped him on the spot. When I got to him I wasn't disappointed. Perfect jet black hair with no rubs 18-10/16" nugget. Loren shows up about 15 minutes later and after a few high fives and photos we start getting him ready for the mile pack out. Loren felt sorry for me and my bad back and doubled his load up so he didn't have to carry me out also. Shortly before 10pm we rolled into camp filled the meatpole and hung the hide then wolfed down a couple of Mountain House dinners.
First off Sunday morning we flesh and salt Scott's hide and hang with a tarp covering it. We head off north to check another area feeling good to have one bear down on our first day. Early afternoon I spot a bear sitting at the top of a clearcut while driving. After a quick stop and setup I proceed to miss this bear as he walks off into the timber. Shooting uphill, probably blew over him, oh well. Close to the beach here, we scout for sign. Bear tracks, skunk cabbage dug up, and a possible bed leads us to believe this bear was on his way down. It is common for these bears to hit the beach after coming out of hibernation. We sit on this spot briefly and decide to hit it later in week.
Monday brings more rain, we head to town to get Scott's bear sealed. We then head over to local bear guru Johnnie Laird's cabin to glean some info. They are busy posting a live POW bear hunt on Muskeg Excursions website. You need to check this out to see how hunting from the water is done as probably the best way to bag a "booner." They head out to hunt as his cook feeds us some crab and gives us some to take back to tent. Probably feeling sorry for us tenters. We get to campsite and decide to move hide instead as rain continues.
Tuesday morning is clear as we head out to new area recommended by a departing hunter in Ketchikan. We set up and tried calling with deer call. Leaving third setup, I see a bear turning around at 40 yds. I dont think twice and fire a shot up his rear. Two insurance shots later we are high fiving again. An old boar and we are within 50 yds of road.
Skinning and packing quarters take about 2 hours. Scott is struggling to cut of the head as his knife keeps hitting something. We find a 6" broke off graphite arrow with a 100 gr muzzy broadhead in the neck meat. After cutting it out we see the hole on his forehead from a prior hunting season. Was this bear shot by Ted Nugent? More than likely an inexperienced hunter had tried a head shot. We head to camp happy as hell to flesh the "arrow bear."
Tagged out, we head to Craig to seal my bear. The local sealer has sealed 28 bears so far, this would be only the third one from upland. Sealing consists of pulling a tooth, measuring the skull, and answering questions like location, etc. This bear green scores 19 14/16. The hair on the skull is rubbed, probably trying to rub the arrow off his head. Amazing the pain they can endure. Checking in on Johnnie, we look at his client's 7' bear scoring 20 7/16 from previous night.
We spend the next couple days checking out other areas as tourists, prepping for our departure now that we have 2 hides and 100# meat going home. We had a great experience, learned alot about bears and hunting them in a different environment from southern CA.
Scott will post more pics later when his camera is up, its been a great week..

Congrats to the both of you!

Nice work to both of ya!

great job on your hunt!
R

Awsome. Something I'd like to experience. Congrats to both of you. Ed F

Love the pix with the arrow ouch!

Congrats on your success! i always enjoy a good Alaskan Bear hunt adventure story because it is my future dream bowhunt someday too! thanks for sharing, awesome photo's and bears!.........tra

We are headed up to an area toward Coffman that has fossels ... with Dana intow for BBQ hamburgers in the rain ... after pulling the Crab Pots ....

My hunters fly tomorrow morning and my last POW hunter arrives. Then it's over to Hyder on the mainland for 2 more hunts. 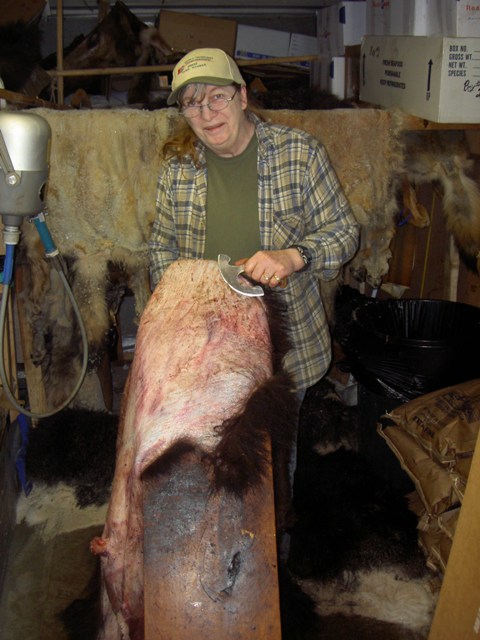 Great job guys. Nothing like laying down a couple of nice animals on a DIY hunt!
M

Congrats on the bears! Be sure to post up the skull after you finish it grtwyhunter.

Good work guys, awesome adventure I am sure.

Really cool. Great job fellas and congrats. What an adventure!

Is it just me, or does Scott look like a corn-stealing coon caught in a game cam in this picture?

If you told all your buddies you'd be eating bugs and Mountain House for a week then got caught with a plate of fresh dungeness crab(thanks Johnny) you'd have that look too.lol