Bringing the cell phone in from the cold. Docking stations.

Bringing the cell phone in from the cold 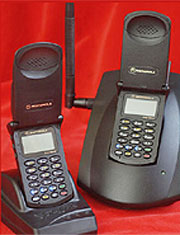 By Richard Drew, AP
A VoxLink, left, and a CellSocket, each holding a Motorola StarTAC mobile phone.

With cell phone companies heaping thousands of "free" off-peak minutes on subscribers, the wireless crowd is beginning to question the wisdom of paying extra to make long-distance calls on regular home phones.

While many may not mind using a cell phone indoors, a small but growing number of people use a special cradle that allows them to make wireless calls using a "regular" telephone.

I can see why. Talking on a cell phone indoors feels all wrong.

The sound of cellular still can't compare with the near-perfection of a wired phone, and after a lifetime of gripping a full-size receiver between ear and shoulder, a mobile phone seems inadequate for gabbing away the hours.

Besides, I think many people, leery of overtime charges, still view cellular as a tool for quickie calls — not hour-long talkfests.

The two docking stations I tested, VoxLink and CellSocket, do a reasonable job of addressing some of the aforementioned shortcomings. But both products, which can be found for as low as $100, remain works in progress.

The devices, which are only compatible with certain popular handset models, conveniently combine wireless and wired service on the same two-line phone, helping blur the distinction between cellular and regular calls.

They look like the desktop cradles used to sync a handheld computer or recharge a cell phone. In fact, both devices also double as a recharger for a mobile handset, though the CellSocket stops charging whenever the device is being used for a call.

Depending on your preference, you can set up a distinctive ring for incoming cellular calls or use the same ring tone for both types of call.

Psychologically, because my cell phone was now patched into my home phone, there was less reason to view wireless as a beast peculiar to the great outdoors: No tiny handset, no pulling up an antenna, no ear bud.

Except for hitting the pound sign after punching in a number — the equivalent of hitting "talk" or "send" on a cell phone — dialing was virtually identical.

There was, of course, the obligatory pause before a wireless call connects. But that was no big deal.

To further replicate the experience of using a regular phone, the docking stations even generate a dial tone for the wireless line when you pick up the receiver.

Although the VoxLink and CellSocket seemed to eliminate some of the tinny, crackly sounds of cellular, there are lingering shortcomings to wireless phones and networks that are beyond the control of these docking stations.

That sort of thing just doesn't happen anymore in wireline telephones. In the industry, they refer to it as "the five nines," meaning 99.999% reliability.

Although wireless technology and network coverage has improved steadily in recent years, cell phones still don't do the five nines, or even the two nines, and that's not something you can fix with VoxLink or CellSocket.

Even if you buy a booster antenna for the phone, or one made specifically for the CellSocket, there are going to be issues with reliability and clarity, particularly for indoor calls. It all depends on your tolerance for such things.

There was little distinction in the basic sound quality and performance of the two products. But the VoxLink may hold some added appeal to some users for a few reasons.

First and foremost is compatibility: VoxLink works with a wide variety of Nokia, Motorola and Ericsson phones. The CellSocket only works with several Nokia lines, though a version for Motorola phones is being readied for launch.

In terms of aesthetics, the VoxLink is smaller, and so takes up less real estate on a night table or desk, and a bit sleeker compared with the boxier CellSocket.

Another possible advantage with VoxLink is a feature for those who have a certain type of home wiring that would enable them to route their wireless calls to all the phones in the house.

Though certainly an appealing feature, the instruction manual will likely be mind-numbing or intimidating for anyone who isn't familiar with the esoterics of standard phone wiring.
You must log in or register to reply here.
Share:
Facebook Twitter Email Link