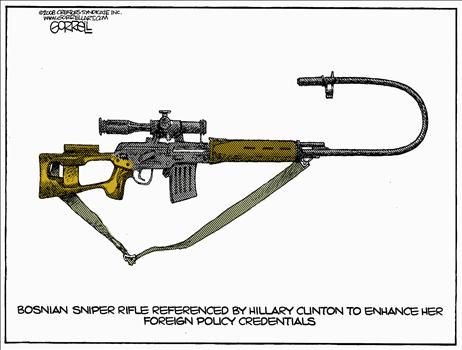 The campaign of Sen. Hillary Rodham Clinton (N.Y.) is seeking to play down news that the former first lady gave an incorrect account of landing in Bosnia in 1996 under sniper fire, and refused to answer additional questions about a flap that could hurt her chances of catching Sen. Barack Obama (Ill.) in the race for the Democratic nomination.

Hillary Rodham Clinton's campaign said she "misspoke" last week when saying she had landed under sniper fire during a trip to Bosnia as first lady in March 1996. She later characterized the episode as a "misstatement" and a "minor blip."

The Obama campaign suggested the statement was a deliberate exaggeration by Clinton, who often cites the goodwill trip with her daughter and several celebrities as an example of her foreign policy experience.

You would think that by now the Clinton camp would realize that their candidate's every word is being fact checked. I love the fact that they are at the point that their response is " we don't want to talk about it". I'm getting to the point where I can't wait to hear what comes out of her mouth next. Talk about loose cannons......

It was obvious she was lieing. Her lips were moving.
C