Hillary and Bill push idea of Clinton, Obama ticket for third time in

Hillary Clinton is pointing to a victory in the battle for the Democratic presidential nomination despite her weekend loss to front-runner Barack Obama in the Wyoming caucuses.
Talk about chutzpah! For the third time in a week, the Clintons are pushing the idea of a presidential ticket of Hillary and Barack Obama.

After Hillary twice gave a thumbs up to the idea, Bubba chimed in, saying the duo would be "unstoppable" in the general election. It's the dream team that makes Democratic hearts flutter and brains turn to mush.
LINK 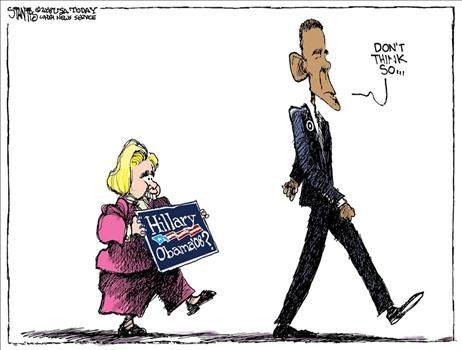 
Oh, by the way...
McCain should come out with a commercial of the Clintons awakened from sleep to a ringing phone.
Hillary would rouse first, and say:
"Bill, would you get that?"
You must log in or register to reply here.
Share:
Facebook Twitter Email Link