A Huge, Boat-Hurdling Carp Is No Mississippi Fish Story

VICKSBURG, Miss., Aug. 23 — Five miles west of downtown Tunica, over the grassy levee that keeps the floods out of town, the fishermen who had gathered by the banks of the Mississippi were telling tales of crazed fish as big as hound dogs that leap out of the water and hit boaters on the head.

"This year there's a gang of them coming into the boats," said John Robertson, who helps out at a bait shop at Charlie's Landing, a fishing camp. "If you're down there fishing, they'll jump over in the boat to you. I had one guy, it hit him and busted his mouth." 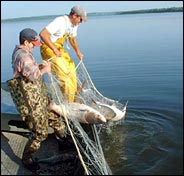 Illinois Natural History Survey
Researchers pulling Asian carp from Swan Lake, a backwater of the Illinois River. The Army Corps of Engineers has installed an electric barrier in the Chicago Sanitary Canal to stem the fish's northward spread.

In the next fishing camp over, Jack Bryan, who had joined some friends for breakfast beers at Big Roy's, a tavern, said: "It started about two, three years ago. What I was told was, some of these fish ponds got flooded, and they spread all over." Two weeks ago, he said, a flying 48-pounder split a buddy's lip.

The men were sober. The tales were true. The fish were carp.

Grass carp, bighead carp and the neurotic silver carp — giant, prolific species all originally imported by catfish farmers in Mississippi and Arkansas two decades ago to control detritus and unwanted plant and animal life in their manmade ponds — have escaped in floods into the Mississippi, and have begun showing up as far north as Iowa and Illinois.

"They are thick as fleas in Mississippi tributaries," said Bill Reeves, chief of fisheries for the State of Tennessee.

These carp lack any touches of style, like a swordfish's elegant fins or a sturgeon's scoopy nose. The grass carp "is like an aquatic cow," said Jack Killgore, a fisheries biologist at the Army Corps of Engineers' Waterways Experiment Station, a research center in Vicksburg. "It just grazes."

Now a more recent arrival, the black carp, is stirring alarm from New Orleans to Ontario. Also known as the snail carp and the Chinese roach, the black carp is a bottom-sucking ogre that can grow five feet long and up to 150 pounds. It gorges on mollusks — including parasite-infested ram's horn snails, which can populate ponds and infect the catfish with wormy yellow grubs. Teeth in the back of its throat grind up its prey like garbage disposals.

The various carp species, imported from China, Russia and Vietnam, are banned from fish farms in several states. They are edible but largely uneaten here, except by some Asian immigrants for whom they are a dietary staple.

Most farms get along without them, said Hugh Warren, executive director of the Catfish Farmers of America, a trade association in Indianola, Miss., but a sizable minority believe they must have them. Several farmers in Arkansas breed small numbers of sterile black carp for sale to catfish farms in Arkansas and Mississippi.

As yet, none is known to have escaped a pond for the wild, but after two years of pressure from many states' conservation and natural resource agencies, the Fish and Wildlife Service on July 30 proposed adopting a rule designating the black carp an injurious species. On Aug. 3 it issued a similar ruling for the northern snakehead, a predatory Asian fish that has been found in Maryland, California, Florida, Hawaii, Maine, Massachusetts and Rhode Island.

"The probability is high" that the rule will be approved for the black carp after a 60-day comment period, said Ken Burton, a spokesman for the service. Opponents, he said, "would have to present very convincing arguments, because all the evidence goes the other way."

The rule would ban the importing and interstate shipping of the carp, although states that now allow them, like Mississippi and Arkansas, could continue to do so. The agency cited other ways to control snails on catfish farms, using chemicals and less invasive snail-eating fish. But some farmers say nothing works like black carp, and they intend to fight the ruling.

In the political storm that is brewing, the Mississippi Interstate Cooperative Resource Association, made up of natural resource agencies from 28 states and four federal agencies, favors such regulations. State and federal agriculture departments tend to oppose them.

"I've talked to both of our senators personally," said Mike Freeze, a black carp and bass farmer in Arkansas. "I know both are opposed." The industry has formed a formidable lobby.

The earlier invasion of Asian carp into American waterways, before injurious-species regulations had been written and long after a ban would have any effect, presents a major conflict. It not only sets commercial interests against conservationists and ecologists, but also pits the interests of one business, catfish farming, against the interests of another, the sale of mussel shells to Japan to make cultured pearls.

In Mississippi, catfish have become the state's fourth-biggest crop. Like the casinos that have opened along the Mississippi River, catfish farms have helped sustain a region of the country, the Mississippi Delta, that ranks with Appalachia and Indian reservations in unemployment, poverty and disease. Workers who have lost jobs on mechanized cotton plantations find jobs at catfish processing plants.

Mr. Warren of the Catfish Farmers of America said 395 Mississippi farms raise catfish in 111,500 acres of water. They represent more than half the nation's cultivated production of catfish. Some farmers also raise a hybrid striped bass for restaurants. "And there are people that grow catfish that also grow carp," Mr. Warren said.

But as the grass, silver and bighead carp already in the river grow and proliferate, conservation agencies are finding them no easier to control than alewives, round gobies, the zebra mussels that have stacked themselves along the Mississippi and across the Great Lakes, and the sea lampreys that latch onto fish and suck the life out of them. Carp hug the bottom of the muddy Mississippi, and nobody knows how many there are.

Day by day, fishermen have lately been reporting sightings of the once-infrequently seen silver carp springing like torpedoes from rivers in the Mississippi basin when outboard motor boats pass. "It's common behavior to jump when frightened," Dr. Killgore of the Army Corps of Engineers said. "One clipped my ear."

For a couple of years, bighead carp have been piling into the nets that Bill Lancaster of Sunflower, Miss., sets out for native catfish and buffalo fish. "They've gotten more and more and bigger and bigger," Mr. Lancaster said. "I caught some bigheads last year that weighed over 70 pounds. They tear enormous holes in your nets."

As they head north, John Chick, director of the Illinois Natural History Survey's Great River field station near Alton, Ill., said, "Individuals have been seen up around Iowa and Wisconsin." Their next stop could be the Great Lakes.

Marc Gaden, spokesman for the Great Lakes Fisheries Commission in Ann Arbor, Mich., an organization of the governments of the United States and Canada that seeks to prevent pollution and ecological damage to the Great Lakes, said the fish were "scratching at our door."

"They're very large, they're voracious eaters, and they're very well suited to the climate of the Great Lakes," Mr. Gaden said.

Jerry Rasmussen, coordinator of large river activities for the Mississippi Interstate Cooperative Resource Association, which petitioned the Fish and Wildlife Service for the ban against black carp, said, "Two bigheads in the 50-pound range have been found in Lake Erie." Mr. Rasmussen said Asian immigrants might have put them there.

To thwart escapees from the Mississippi, and any other fish heading from there to the lakes along the Chicago Sanitary Canal, the Corps of Engineers has installed an electric barrier in the canal that induces them to turn back. "The barrier was turned on in April," Mr. Gaden said. Asian carp have yet to test it, he said, but so far it seems to be working on gobies.

With relatively few established in the rivers, it is hard to tell which of the carp, if any, will become bearable nuisances, or whether any will become something much worse, like the zebra mussel. As big, gluttonous vacuum cleaners, carp compete with native fish for food and spawning ground. "At some point, we're going to run into a major crisis," said Ronald Benjamin, a fisheries biologist in the LaCrosse office of the Wisconsin Department of Natural Resources.

Richard Wehnes, fisheries unit chief at the Missouri Department of Conservation, said, "The silver carp has taken off exponentially." Because they compete with largemouth bass, bluegills, redears and crappies for plankton — single-cell plant and animal life — Mr. Wehnes said, "Our concern is, what are they pushing out?"

Although it is too late to stop the other Asian carp, Mr. Wehnes said his office had ordered producers to destroy their black carp. To help them adjust to other means of snail control, he said, the department is providing sterile black carp to use in their ponds temporarily.

Mike Freeze, who raises hybrid striped bass for restaurants, also produces the sterile black carp, which he sells to Mississippi farmers. That business would stop under the Fish and Wildlife Service's rule, and Mr. Freeze is a leader of the lobby against it.

"There has not been a single black carp that escaped into the wild," he said. "It's a legitimate concern." With screens on the drains of the ponds and high leveelike walls around them, he said, "We're extremely careful, and we're being punished for that."
You must log in or register to reply here.
Share:
Facebook Twitter Email Link