I had headed out to Eastern Kansas for the turkey opener in March but with bad weather and a poor hatch the past couple of years on the wildlife refuge that I was hunting I wasn't able to bag a bird. This past week I headed back to Kansas only this time I went to Northwest Kansas. It was a guided hunt on several private ranches. This time the results were very different, the first two days we were dealing with tornado watches and rain and the birds were there but very silent and not responsive to any calling. The evening of the second day my luck changed, we were still dealing with rain off and on but we were seeing lots of hens when finally a jake came in and I decided to go ahead and take him. 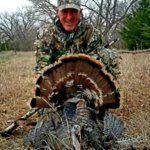 We sat in the blind for two more hours after I shot him hoping a larger bird would come in to our set up. We watched as a parade of hens and whitetail deer traveled in and out of our set up but no toms. The next and final morning we woke up to clear skies and no wind, as we headed to another blind we knew it was going to be a good day. We heard a lot of gobbling at first light and after a two hour sit we finally had two jakes come into range, as the two birds began beating up on the decoys I had to wait several minutes for the two to separate so I could pick one off.

Just after I pull the trigger we look of to our right at the end of the field and see that three big toms had been heading in. No toms but overall it was a interesting and fun three days!

Nothin’ wrong with that!

These are Rio's although there are some Merriams on the ranch.
C

Congrats and great job! Jakes are a blast to hunt. Sometimes they are so comical, ya hate to shoot 'em. I'll bet that big guy on your left thought he was a struttin' boss.