Looking to buy a travel trailer or toyhauler.

Buddy has a Airstream and it is really nice but they run 60K up too 100K. Plus i want something i can drag down a 4wd trail. 65K tops. Even a conventional trailer with some good ground clearance will work. Need it to sleep 4. Good AC a must and good heater. I like lots of room for gear so a pull out would be the best? Im debating if i want it to haul a razor or not. I would like solar panels for off grid and a separate shower, i hate straddling terlits. A toyhauler seems to be what i need.

Go used or too many gotchas with used trailers? Any dealers in Socal to check out? I see financing is down to around 3%

No matter what you go with, you will need 220V to power an A/C. But then, you know electricity better than anyone on this forum.

If you're hauling stuff, personally, I would lean toward an open trailer and find an inexpensive popup, then mount it (sans axle) on the trailer; that leaves you the ground clearance you want, the compactness that you want and gives you extra space for the razor. Most popups can be had with both a heater and an A/C. You can score a descent popup without a lot of issues for $5K and often much, much less than that.

I think I'm just about done buying new. Almost all markets are flooded with low-mileage, lightly-used merchandise. I bought my popup used, I bought both my Harleys used and I bought my last two trucks used. I have had NO issues with someone else's headache. That one of the benefits of a screaming good economy; lots of folks upgrading just because they can.

Belch, we had a 110 VAC AC unit in my dads 26 ft trailer that worked fine in MO heat & humidity. I have a 110 VAC unit i use as backup at home. 220 VAC will always be more efficient and better savings but the new 110 VAC units are really efficient. I dont think solar is going to run an AC unit when off the grid but if you have a jenny or shore power available it would work just fine. Highest solar power unit ive seen are them Aussie caravans and they have 300 watts available. American made ones im seeing 170 watts.

Im with you on the used gear, the only thing i ever bought new was my dodge diesel truck and that thing is 15 years old now and mechanics tell me at 300k im still breaking it in.

I sure like them Aussie caravans, check out this $200k model. Way waaaaay out of my price ballpark but it sure is nice to dream while buying lotto tickets or betting the ponies. 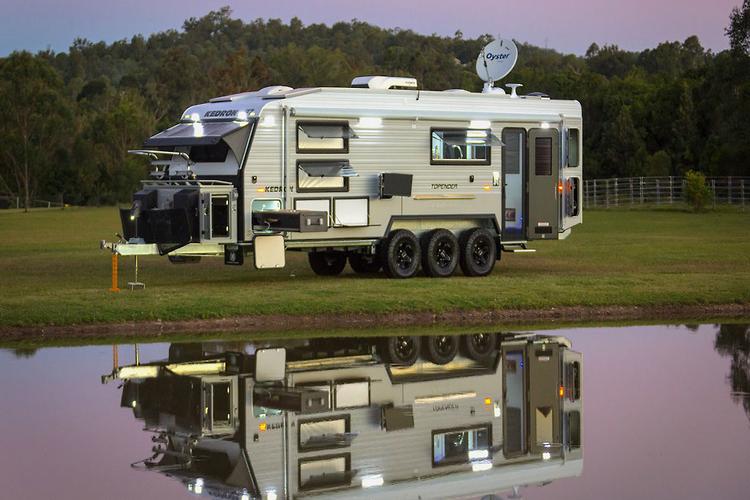 When we were getting ready to retire I purchased a bunch of items new with the idea they would last me a long time and I wouldn't have to replace them for 15-20 years. The only new items that I purchased then that I still use are my travel trailer and my boat. I would not buy them new again if I was doing it over. I think the opportunity to save money is huge buying used. My buddy was going to order a new Lance travel trailer for 50K. One of the dealers he was dealing with had a customer selling the same unit that is a 2017 for about 25K. He can do a lot of traveling with that 25K savings. The trailer is in perfect condition. I am just starting to kick the tires looking for a UTV to carry 4 people and if I find a used one I like I will do that rather than buy new again.

" But then, you know electricity better than anyone on this forum." I guess the electricians on the forum don't get any credit?? LOL I am a retired IBEW electrician. No hard feelings Belch just giving you carp.

Im seeing some owners say there are trailer length restrictions in NP campgrounds. 26 ft is what i see mentioned. Anybody see any other trailer restrictions in their travels?

I rarely see any restrictions in the campgrounds I use. I have been told about length restrictions I just dont see it where I go. The other problem you might encounter is I have read that some "nicer" private campgrounds will not allow RVs over 10 years old. Mine is now 16 years old and I have no intention of replacing it but then I don't stay in those private campgrounds.
I have had a few discussions with some KOA campground managers in Idaho about a particular campsite that I have used off and on for 20 years. Every time I try to get that site I am told trailers are not allowed to back in. I then convince them to check the computer and they can see that I have been backing in to that site for years. So far I get the site I want. Most campgrounds have the pull through sites way too close to each other.
When hunting I usually don't stay in improved campgrounds so length or age isn't an issue.

Typical hunting canp for me. Away from other campers.

I remember 24’, ca state campgrounds. But I also remember 35’, probably depends on the campground.

I recommend looking at used. I have purchased 2 used travel trailers.

Well, ive circled around to back where i started from a couple years back. Looks like a slide in truck trailer with the pop up top is where im headed. I can tow the jeep or buy an enclosed trailer to tow a RZR or 4 wheeler. This will suit me better with the TT always on my truck so i can bug out anytime with no big trailer hassles. I also like the lower profile better, with my dads hard side truck trailer we bashed in both front corners on tree limbs we didnt see in time. I can boondock camp a lot further with this set up and park just about anywhere to catch some winks or camp.

Some other routes i explored was converting an enclosed cargo trailer into a travel trailer. Theres a good facebook group for doing this and you can design and build the trailer to your likes. This would be if you have the skillz or a friend has the skills. Doesnt look like you save a lot of money but the QC on RVs is horrible from what ive seen and read. And now they are slamming them out due to demand from the virus. Plus, you built it and you'll know its right and how to fix it. I may get an enclosed trailer and just plumb in a bigger fridge and hot shower i can fit in, I hate straddling a toilet to take a shower. The pop up truck trailers have hot water for an outside shower but what if its snowing?

We are a group about converting cargo trailers into campers. Our members have either built one themselves or in the discovery phase about building their own in the future. We ask that you do not...

Thanks for all the ideas and info.
F

A hunting buddy had an Alaskan pop up. It worked for him, lower profile got better mileage.

How do you plan to use your rig.

A place to sleep, cook, toilet. Or a place to do the essentials plus relax, watch tv, entertain.

I went from dirt to tent to car camping to truck camping to travel trailer to cabin, and now resorts.
You must log in or register to reply here.
Share:
Facebook Twitter Email Link