In an interview to air later tonight on Nightly News, McCain tells NBC's Brian Williams that while Obama might criticize him for representing a third Bush term, Obama seems to be running for a second Carter term. Part of the transcript...

Williams: Is it going to be tough to run with an incumbent party for the White House, given this economic backdrop? 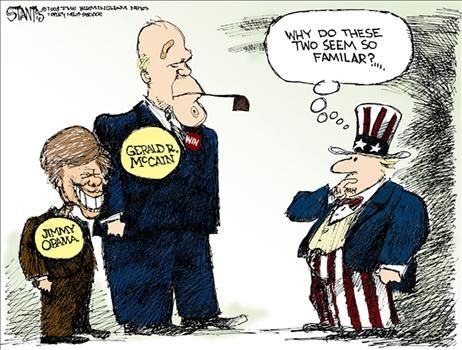 The whole political deal just bums me out. Looks possibly as if the Obamer will win, latest rumor is that he is looking at General Casey for a VP. At least we can all look forward to new stiffer gun laws, more restrictions on hunting, and higher taxes.

But then there is the choice of the Manchurian Candidate, aka Mr. Flip Flop. If he gets elected I think the mask will come off and we will be looking at Oprah Winfrey!