The Marines Vs. Haditha Smear Merchants

Yet another U.S. Marine, Lt. Col. Jeffrey Chessani, had charges dropped Tuesday in the so-called Haditha massacre -- bringing the total number of Marines who've been cleared or won case dismissals in the Iraq war incident to seven. "Undue command influence" on the prosecution led to the outcome in Chessani's case. Bottom line: That's zero for seven for military prosecutors, with one trial left to go.

I repeat: Haditha prosecution goes 0-7. But you won't see that headline in the same Armageddon-sized font The New York Times used repeatedly when the story first broke.
LINK 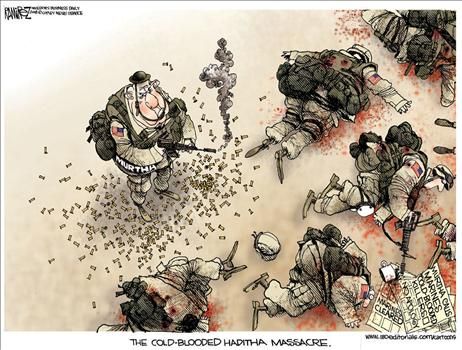 Our President should have put an end to this a long time ago. He is the Commander in Chief. Or supposed to be??? We now have troops thinking twice about engaging. That will cost American lives.
I voted for President Bush. What happend to him?? Pelosi neuter him??
You must log in or register to reply here.
Share:
Facebook Twitter Email Link